Why Puppy Socialization is So Important

If you have or are planning to get a new puppy, you may have heard that the key to a happy, well-adjusted, well behaved dog is to socialize them properly as a puppy.  The reason for this is that puppy socialization teaches your puppy about the world around them. Through interactions with other living and non living things, they will learn what is safe and what is not. It also teaches your puppy how they should react to commmon situations. A puppy that has not been socialized properly may grow up to be fearful of the unknown

To give you an idea of just how important it is to socialize your puppy the American Veterinary Society of Animal Behavior issued a position statement on the subject.  In AVSAB’s Position Statement on Puppy Socialization, it states that “it should be the standard of care for puppies to receive such socialization before they are fully vaccinated”.  They go on to say that “early and adequate socialization and programs of positive training can go a long way to preventing behavior problems”. Studies have shown that behavior problems are caused by poor socialization and is the number 1 reason dogs are surrendered to shelters. It is also the primary cause of death for dogs under three years of age.

Having had a dog that was not properly socialized as a puppy, I can attest that it does cause you and your dog hardships for their entire life.

After having a rescue dog with many behavioral and medical issues we decided that our next dog would not be a rescue. This time we were going to look for a reputable local breeder.    But we really didn’t know what breed of dog we wanted, so we decided to look at puppy stores just to see what was available.  This of course, was a mistake.

Molly was the cutest, little tail wagging puppy I had ever seen.   She was a 2 month old friendly English Springer Spaniel that just wanted to play.  When we took her to a room to play with her she was so excited that she was literally sliding up the walls. I told my husband that she was too hyper for us (actually I told him the dog was crazy) and that we shouldn’t buy from a puppy store, but he was falling for her.   I convinced him not buy her and left the store.

But he couldn’t stop thinking about her and two months later he stopped by the store to find that she was still there.  After hearing that she was going to be put down, we decided to buy her at a steeply discount price.

At this point Molly had been living in the store for two months.  Since she was a puppy mill puppy, I assume she was born in a crate and lived in one until she was shipped thousands of miles to the store.

We knew puppy mill puppies could have medical issues, what we didn’t know at the time was that living in that environment for so long, severely affected her social skills.

Soon after bringing her home we started noticing Molly’s lack of social awareness.  Since she was four months old and fully vaccinated we were free to take her out for walks to the local park. We had a friend that lived near the park that we would visit on the way.   There we would meet up with other dog parents to chat and our pups were free to mingle. But Molly always seemed to annoy the other dogs.   She didn’t notice the social clues they were giving her.  One day, one of the adult dogs snapped at her.  She took notice at the time, but continued to be clueless around other dogs. This lead to her being bit in the park by an older dog who did not appreciate her high energy.

When she turned 6 months we sent her to doggy day care a few times a week to socialize with other dogs, but just like at the park she didn’t seem to be able to get along with the other dogs.  Again she was bitten. By the time she was 1 year old she started to go on the offense. When she met another dog, she would bite them before they bit her.  This was a problem.

Molly was also afraid of people.   She was ok with adults, though she would urinate whenever an adult would pay attention to her, sometimes on their feet.  Children were a different story.  She was afraid to let them near her.  If they got too close she would let out a warning bark.   We were afraid that one day she would bite a child, like she did with dogs.

Over time she learned to trust people and we learned she could not be near other dogs.   Although we were able to correct some of her issues through training, she never completely overcame her fears. I do believe all her issues arose from not being socialized at that critical stage in her life.

What is Puppy Socialization?

Socializing your puppy means introducing them to as many new people, places, sounds, and experiences that can be safely achieved without causing overstimulation. The optimal time to socialize your puppy is before they are 3 months old. Sometime between the ages of 3 and 4 months your puppy will naturally start to become weary of the unknown.  Now that doesn’t mean you should stop socializing them after 4 months. It just means they are the most open to new things before 3 months old.

But exposing your pup to new experiences is not enough. You want to teach them how to react when encountering something new.  To do this you must be calm when exposing them to new situations.  You can also use distraction as a way to keep your pup calm. Giving them their favorite treat can turn a frightening experience into a pleasant one.

When to Start Socializing

Puppies start the socialization process when they are still with their litter.  They follow clues from their mother regarding the rules of the house and they learn about proper play through interactions with their littermates.   But when you bring your puppy home, you become their primary teacher.

Socialization can begin inside your house as soon as you bring them home.  Introduce them to the other members of your family, to where they will sleep and to their new food bowls.  If you plan to crate train them, you should introduce them to the crate.

For simple steps to get you started on crate training read: Crate Training Made Easy

According to the AVSAB position you can start to socialize them in safe places outside of your home once your puppy has received their first set of vaccinations and deworming at around 7 to 8 weeks old.

How to Socialize a Puppy

The socialization process can be broken down into main three categories:

Handling means getting your pup used to being touched, either by you, family members, the groomer, the veterinarian or other people.  It can be as simple as having new people pet them or a trip to the veterinarian.

When working on handling your pup, think about all the things that might be done to your pup as they grow up. Things like grabbing their ears, looking in their ears, holding their paws, touching their nose, rubbing their tummy and holding them in your lap.

Interactions are meeting new people, dogs, or other animals.   Make sure you introduce your pup to a wide range of people and animals.

Puppy Socials are a great way to introduce your pup to new people and puppies in a safe place.   Most puppy socials are run by professional trainers who require proof that the puppies are up-to-date with their vaccinations and deworming.   Not only will your pup get to meet and play with other puppies, you get the benefit of a trainer who can help you understand what normal play is versus aggressive play.  To learn more about Puppy Socials read Puppy Socialization Classes- What to expect

Experiences can be anything your dog may encounter in their life.  Think about how you plan to include your dog in your activities, than slowly introduce them to it. Start out with a less stressful experience like getting used to wearing a collar and walking on a leash. When they have mastered that you can move on to a more stressful situation like walking on the sidewalk on a busy street.

A good way to provide experiences in a safe environment is to go to Puppy Kindergarten. In Puppy Kindergarten, your pup will be exposed to different dog owners and their pups. In addition to new people and dogs they will learn basic commands like sit, stay and come. They will also be exposed to things like being handled by a trainer or playing on different surfaces. However, if you find a puppy kindergarten or puppy social that does not require proof of vaccines and deworming look for another place.

Here are 5 Safe and Easy Ways to Socialize your Puppy before they are four months old.

Remember not to overdo it. Puppy socialization should take place over time with time in between for your puppy to rest and feel safe.  Too much too soon can cause your puppy to become over stimulated and stressed. The main purpose of puppy socialization is to help your pup feel confident with the world around them.  A confident, at ease dog will be easy to control and a pleasure to be with.

Sometimes, even though we have the best of intentions, we still make mistakes during the socialization process.   I sure know I have. Here are 10 common puppy socialization mistakes you don’t want to make.

To learn more about puppy socialization and training read: 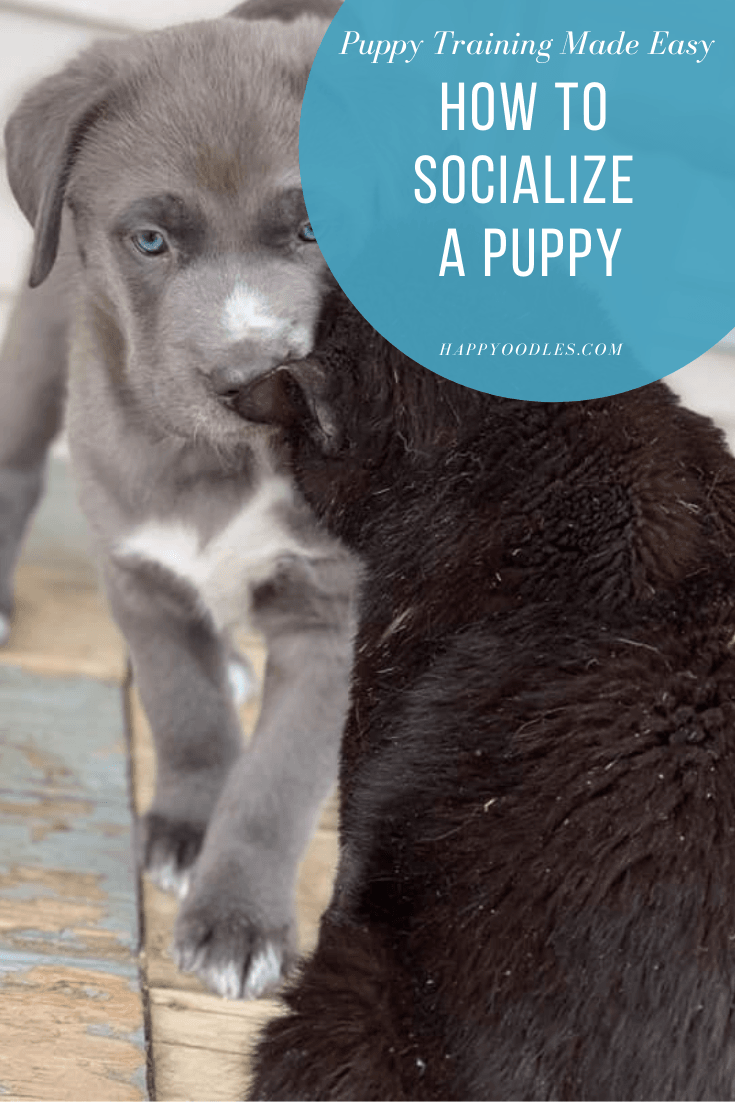 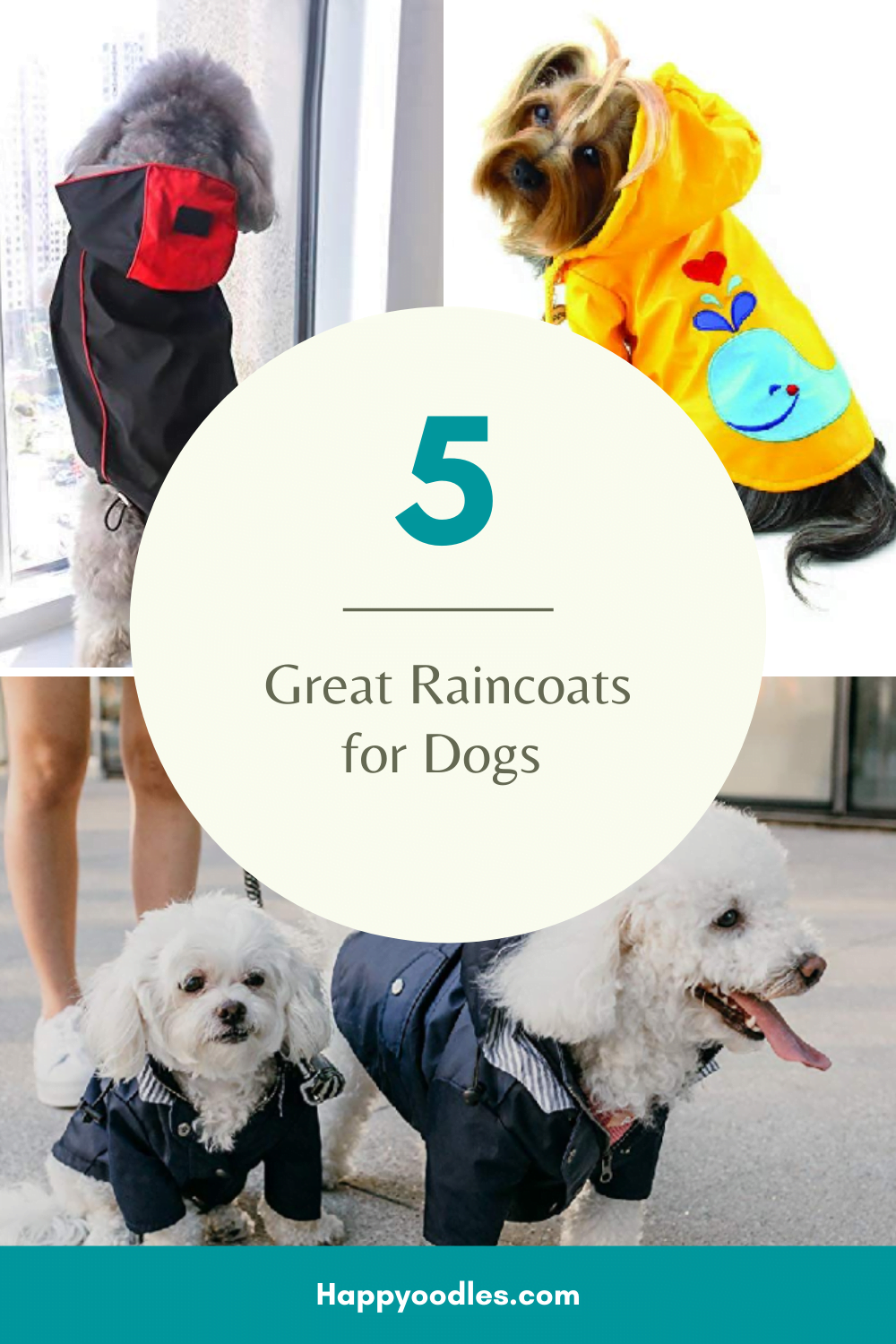 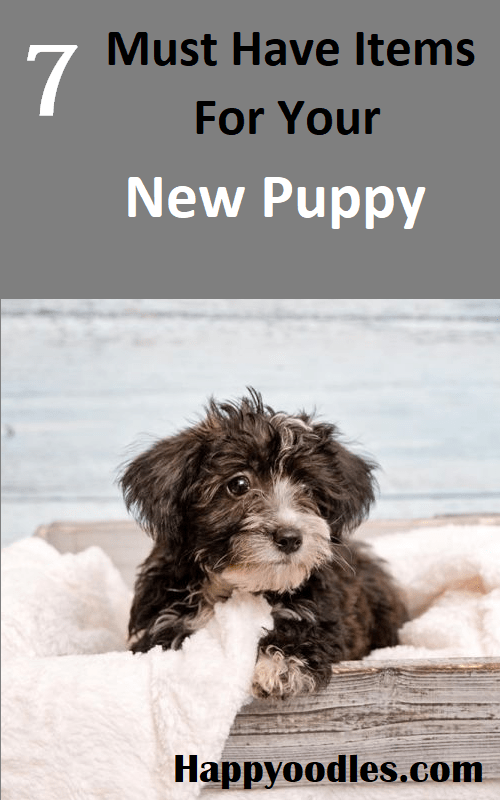 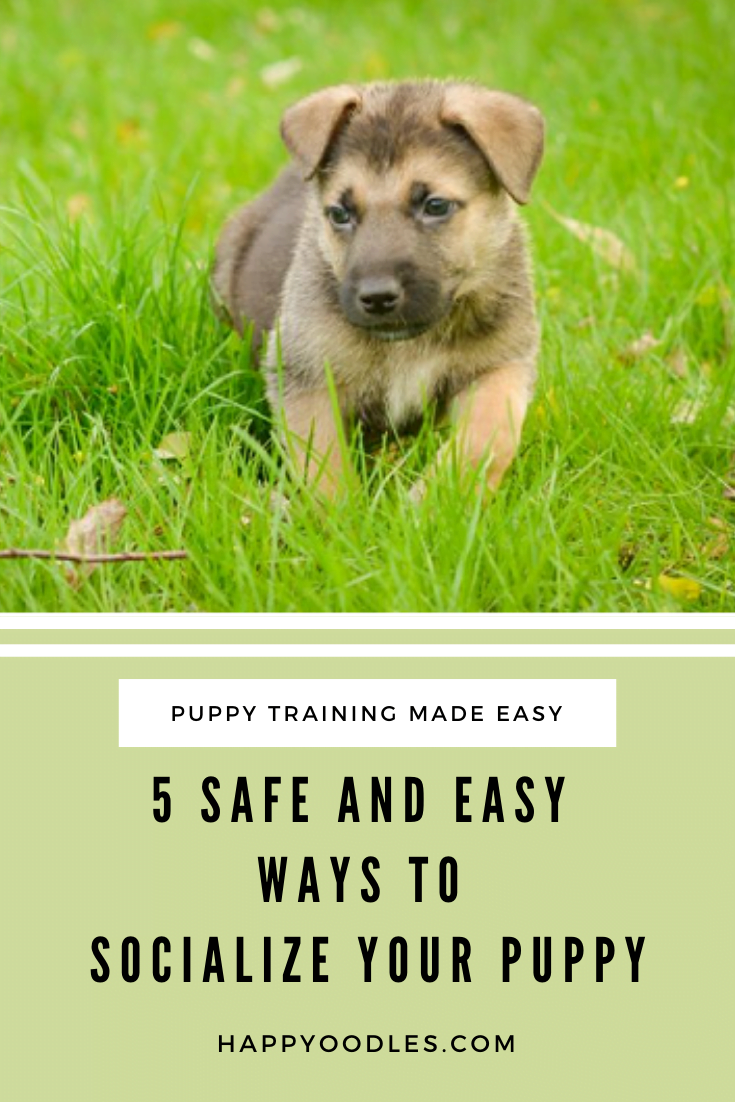